{INFOGRAPHIC” BLACK FRIDAY 2018 DEALS, ANALYSIS ON GAMING CONSOLES  If you are a gamer and you are searching for some great deals on the market . then wait till Black Friday. Surely , all of you know what black Friday is . And  for those who do not know about this absolute madness . Here I am , so black Friday is the day after thanksgiving day on which a huge shopping festival takes place where retailers like Amazon , Wal-Mart , NewEgg etc. offer huge discounts  to customers. The reason might e they want to clear old stock or make way for a newer product to release. Whatever the reason is we should take this opportunity to male the burden on our wallets lighter . Now , you will be wondering when will this madness kick off. Well, black Friday will officially hit on 23 November . But due to the eagerness and competition between retailers the sails will kick off one or two weeks before official black Friday and will persist till one or two weeks after  it . So if you wan…
Post a Comment
Read more

Blizzard give their fans another gift celebrating their dungeon sequel’s two-year anniversary.

Blizzard give their fans another gift celebrating their dungeon sequel’s two-year anniversary.

If you played Diablo III over the past week on PC,  you’ll have noticed that the drop rate for legendary items and rift fragments was doubled thanks to a special two-year anniversary buff, marking the game’s May 15th launch in 2012.

Diablo III Legendary Drop Rate Permanently Doubled
Fragment rates have returned to pre-event levels, but Legendary drops have been permanently doubled. Yay!
Well, it appears the promotion was such a success that Blizzard will be raising the drop rate for legendary items permanently, bringing the sequel more in line with the console version’s more charitable nature. Rift fragments however will go back to their drop rate pre-anniversary event, but it’s best not to look a gift horse in the mouth.

“I come bearing exciting news. Due to the overwhelming popularity of our Anniversary buff we have decided to keep the increased Legendary drop rate once the Anniversary ce…
6 comments
Read more

Watch the new Batmobile in action! 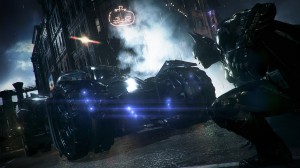 Watch the new Batmobile in action!

First Batman: Arkham Knight Gameplay Trailer Released
Whatever you do, don't call it the Tumbler.
WB Games and Rocksteady have released the first gameplay trailer for the highly anticipated new entry in the Batman: Arkham series.

This new footage is all gameplay and features Batman tooling around Gotham both inside and outside of his Batmobile – which players will drive for the first time in by the way – as well as a lengthy appearance by new villain, Arkham Knight who seems to have the Dark Knight in a rather tricky spot.

The trailer ends with a ‘coming soon’ moniker rather than the promised 2014 release date for Xbox One, PS4 and PC but we’re guessing all will be explained soon when Arkham Knight takes to the state at E3 in June.

Way to get us interested in the Batman series again Rocksteady! We can’t wait to get our hands on that  car/bike/ATV/tank thing…
4 comments
Read more